The theme I used for some years now wasn’t updated for the newest version of the framework. I’m working on it, if something seems screwed please let me know trhough the contacts. Thanks indeed.

Path of the Gods from Rome

In the last year I received at least 10 mails about doing POG from Rome. On a day trip. While it is feasible it is only for braves. Detailed guide with prices could be find in the FAQ section here. Let me know if could be improved.

Path of the Gods buses timetables for fall 2018 (Ravello added!)

Hi all, I know, I’m late. The bus to path of the Gods timetables for september and october 2018 are on line. Please refer here and do not forget to double check these informations by yourself.
These timetables are mainly to help you to reach the path of the Gods from all the Amalfi Coast and Surrentine Peninsula. Please let me know if something doesn’t work.
Please keep in mind these timetables are only valid for a limited time range. These timetables includes Sorrento to Positano to Amalfi and Amalfi to Bomerano (Agerola). As per you request, with this update, I added Ravello to Amalfi bus timetable.

Path of the gods reopened (from a post of Ruth Peake)

THE REOPENING OF THE PATH OF THE GODS 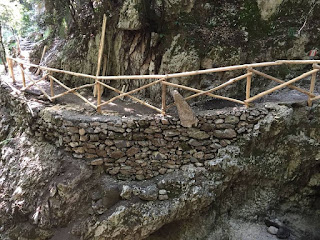 Today the Path of the Gods was officially re-opened following its “closure” by the local authorities last November when part of it collapsed after heavy rain.
I say “closure” for two reasons:
– firstly, it was never ever really closed. There was never a proper barrier to prevent people passing and even the official notices were affixed as discreetly as possible, almost as an apology.There was no control. The distinct impression was that “yes, it is risky, however we have done our bit by putting up a little notice and a bit of red tape, so if you do have an accident, you only have yourself to blame, and you won’t get a cent from us”.
– secondly, although tour companies and truly professional guides  respected the ban, adapting other itineraries which enabled their customers […] as courtesy to the original poster you can continue to read on her blog

The Path of the Gods – Open or Closed? [Ruth Peake post]

The Path of the Gods has been appearing in the local press rather frequently over the past few weeks, which is hardly surprising when you consider that the hiking season has now started in earnest and that  the most famous and popular route of this area is still  officially off limits.
Yes, for anyone who has still no realised this,  the trail has been “closed” to the public since 17th November 2017, when the local authorities of Positano issued an  ordinance banning access to a part of the Path which had collapsed following  heavy rain. Since then, another small stretch disappeared over the edge elsewhere, but as far as I am aware, this one was never the object of any prohibition, although in my opinion just as risky, if not more so, than the first. [continue on Ruth’s blog]